A strange pink glow has taken over Silverglade Village

You see what awful things have happened here in the village? It is a disaster! A catastrophe! Is this the beginning of the end? Is this the final doomsday? Is this how Silverglade and Jorvik is going to end… Swallowed in a hungry purple-pink glow? 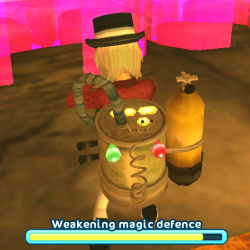 In the Service of the Keepers of Aideen


I don’t know what Mr Sands and his minions have been up to this time, but it is clear that Garnok is much more active than he has ever been before. Now we need to help in keeping watch after new cracks. They can come at any time, and believe me, there are going to be more.
We have an important assignment. As Keepers of Aideen, it is our duty to protect Jorvik from going under and vanishing into the Pandorian pink fog. From now on we need to keep watch. Every day we need to be prepared.
The easiest thing to do is to ride up the mountain and look out over the lands. The pink glow can be seen from a long way away. In the evening, at night, and the early morning will be the best times to see them. May the light of Aideen shine over us all in these troubled, pink-glowing times…

Daily quests to close the rifts
Dismount your horse and click on the crack to start the quest dialogue, then use the Shadow Sucker on it to enter the portal. Once all the daily cracks have been closed visit Avalon in Valedale to complete the quests. Each crack you close will give you reputation with the Lightening Circle faction.