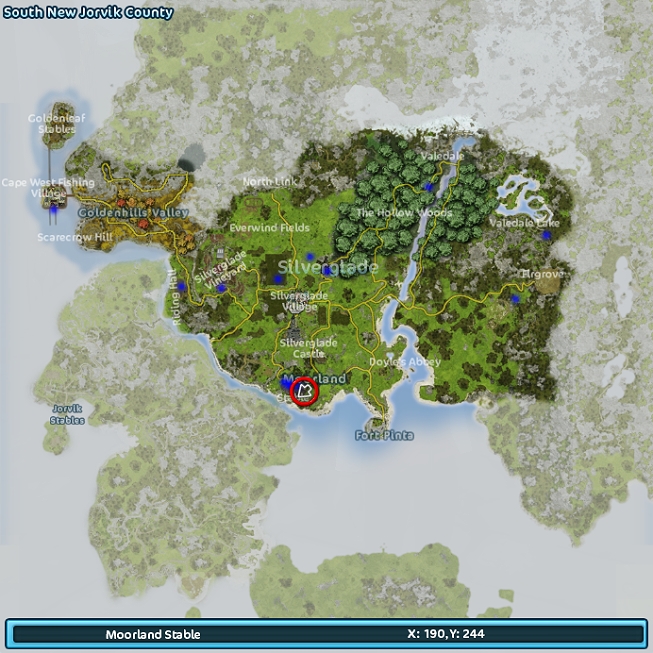 Nilmer's Highland is a small mountainous area above and to the west of Moorland.

The Abandoned Farm belonged to Mr. Hill who was a very talented young rider around Jorvik. Long ago, Mr Hill was competing in a race from Moorland to Hillcrest, when galloping across the large wooden bridge, it suddenly gave way. Mr. Hill died, however his spirit remains at the farm, in search of his beloved wife.
It turns out the bridge wasn't built to proper standards. G.E.D, the company who built the bridge, used old wood and substandard concrete to save money. Mr Hills wife, moved to Firgrove shortly after the accident.
On the northern side of the highlands you will find Ydris and his side kick Jester with their carnival - circus wagon.

From Moorland take the east road past Old Man Jasper's farm and head east towards Fort Pinta. At the first road junction, on the left, is where you will find Mary, a stable girl standing at the gates to the chapel with her ​​little lamb Twinky. Doyle's Abbey is an old dilapidated chapel built by the monks several hundred years ago, several graves still remain today.
The trail to Jarl's Tomb is immediately behind the Abbey.  During the 1200s, Jon Jarl with his fleet landed where Fort Pinta stands today. He was a very popular ruler of Jorvik and was buried here in Jarl's Tomb. The burial vault consists of several chambers. Each chamber is sealed and can only be opened with special ore that has mystical powers. Jon, the eternal protector of Jorvik, remains loyal to Aideens Patrons.